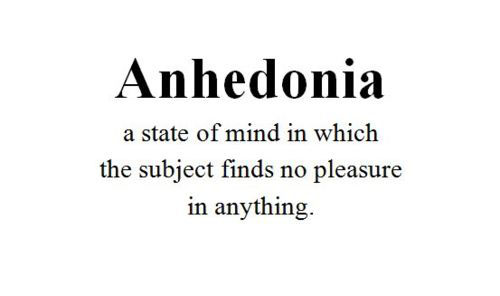 The absence of pleasure of any kind is common among addicts who are in recovery. What could replace those extravagant highs in active addiction? It has been noted that many have relapsed due to the phenomenon of anhedonia in recovery; and through such mishaps some have even died. They relapse from the mere fact that pleasure as was known, could not be attained hereafter. Hence, the absence of pleasure is not a trivial aspect of recovery, but a serious and chronic condition that is deserving of due attention. It is a secret killer because its presence has often times been overlooked by counselors and addiction specialists as other conditions like depression and PAWS (Post-acute withdrawal syndrome) take center stage in explaining the lack of drive in early recovery. It’s about time that we gave anhedonia the spotlight it deserves.

The word “anhedonia” is Greek for “without delight”. It is a condition in which the capacity of experiencing pleasure is totally/partially lost. [1] It could happen as a cause for, or a result from active addiction. [2] Anhedonia generally occurs upon abstinence from addictive substances and or behaviors.

Is addiction a reason for anhedonia?

Clinical observations suggest that anhedonia is common in drug addiction. In abusing drugs over a prolonged period, the brain’s reward thresholds have become chronically elevated without a return to baseline levels come abstinence. It has been proposed by Koob and Le Moal that this irreversible impairment, known as hedonic allostasis (a chronic deviation of the brain’s reward set point) is responsible for anhedonia in recovery. [3]

Another study done by Robert Malenka of Stanford University in 2012, found that the nucleus accumbens, which is the brain’s reward system becomes dysfunctional when anhedonia occurs. This happens as a result of dopamine inactivity. [4]

Be it dopamine inactivity or the actual impairment of the brain’s reward thresholds, it is evident that addiction is responsible for anhedonia. Though many do suggest that inherent anhedonia may have caused some to turn to addiction due to an already predisposed addictive personality.

Therefore, in assessing which came first is somewhat akin to judging whether the chicken or the egg preceded one another. It is a fairly controversial conundrum, yet based on the two studies above, it is evident that addiction is a reason for anhedonia.

The table below is a list of symptoms for this ailment, which can be divided into social and physical anhedonia: [5]

·       Social insecurity and feelings of stigmatization and  shame

·       No pleasure derived whatsoever from any physical  activity such as eating, having sex, exercising, etc

·       Consistently ill/sick such as having a cough,  feeling nauseous, and having headaches

How does one get better from anhedonia?

One can get out of this hell-hole of doom and gloom. Recovery is slow, but if one persists on the work needed to get well, there is hope beyond anhedonia. Below are the various ways one can get better and out from this trap in early recovery: [6]

i) Psychotherapy: There are many ways to change our mindset from the feelings that activate anhedonia. One great way to disputing and overcoming the negative core beliefs that offset anhedonia is to practice “Cognitive Behavioral Therapy” (CBT). For instance, if one believes that one will never succeed, dispute it by finding evidence of success either from the past or have the courage to do something different to prove that success is possible in one’s life. Therapy isn’t just about playing with the mind, but acting on the activities that help to encourage this change.

ii) Pharmacological treatments: Sometimes, changing the mind is not enough. There are inherent chemical dysfunctions that are occurring within the brain that is causing the anhedonia. For example, the depletion of the neuro-transmitter dopamine in the nucleus accumbens amount for much of the depression felt in early recovery. There are drugs that target the dopaminergic reward system such as Bupropion, psychostimulants, and dopamine agonists.

iii) Acupuncture: This traditional Chinese medical practice targets the reward system through the manipulation of meridian points using sterilized needles. It works for those who believe that the body is influenced by the energy forces, known as “qi”.

iv) Exercise: Physical exertion is said to be able to produce internal pain killers such as the endocannabinoid and beta endorphin neuro-chemicals. The high after a good workout is usually coined as the “runner’s high” and can take the edge off the daily grime of abstinent living.

v)  Meditation and Yoga: Being still in the here and now is the crux of meditation and yoga. Focusing on the breath and doing poses that distract the mind to merely focus on the present has marvelous benefits for the well-being of those going through anhedonia. Instead of dwelling on the futility of existence, one could replace the focus with the present moment.

vi) Mindfulness: One product of presentist thinking is the phenomenon of mindfulness. Keeping one’s mind focused on what one is doing presently, be it walking, running, talking, and eating removes the mind from being distracted by anhedonia.

vii) Self-compassion: Addicts often times condemn themselves for the slightest mishaps in their early days of recovery. Taking it easy and replacing the condemning self-talk with words of encouragement, love, and understanding helps a great deal to remove the harshness of anhedonia. Having self-compassion also releases the love hormone “Oxytocin” into the system, which in turn gives us room to nurture the tender selves that is undergoing immense change. [7] So the next time anhedonia strikes, say to yourself and hug yourself as you do: “Poor you, it must be difficult going through such a horrible experience. It’s okay and normal to feel this way. Hope you feel better now. Is there anything I can do for you?” You’d be surprised that by having compassion for oneself, we get out of our illness that much quicker.

By having and experiencing the pain of anhedonia, we learn more about who we are in recovery. We learn the ways in which we get better and in a sense, cultivate empathy for those who are going through the same.

Connection is the ultimate remedy for this phenomenon because in connecting with oneself, others, or the world at large; life becomes meaningful in spite of an inner dialogue that disagrees with that conclusion.

Eventually, anhedonia is a secret friend in recovery because it is a reminder of what needs doing and what is missing in one’s life. It helps us take inventory and motivates us towards the actions necessary to dispute its existence.

[5] Taken and modified from: http://www.healthline.com/health/depression/anhedonia#Symptoms2

[6] The sections on Psychotherapy and Pharmacological treatments were taken and modified from: http://www.ncbi.nlm.nih.gov/pmc/articles/PMC3089992/