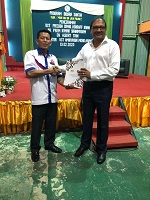 To celebrate the national anti-drugs month, the National Anti-Drug Agency of Malaysia (AADK), has organized a series of educational campaigns across the nation. In its 4th year, the countrywide drug campaign aims at raising awareness on the dangers of drugs faced by Malaysian communities.

Among the many events scheduled countrywide was a focus group discussion titled “Is There Still a Way Back Home?” held on the 19th of February at the Cure & Care Government Rehabilitation Centre (CCRC) in Papar, Sabah.

Attended by a number of inmates detained for drug related offences, among the notable speakers was Solace Asia CEO & Clinical Director Dr. Prem Kumar Shanmugam whom, joined by Ustaz Pirzada Ismail Ashraff Khan of Jabatan Hal Ehwal Agama Islam Negeri Sembilan (JHEAINS) and Tuan. Albert Tian, Deputy Director of the National Anti-Drug Agency (AADK Sabah Branch), proceeded to take the stage to educate the attending crowd on the efforts Solace Asia has taken for the past 6 years to combat addiction in the nation as well as the treatment methodologies and approaches used in the center to treat those in need.

Solace Asia would like once again to thank the AADK organizing committee for another collaborative opportunity to share Solace’s leading professional experience in the war against substance abuse.