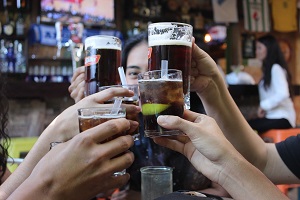 According to the World Health Organization, Singapore is among the nations with the lowest alcohol consumption in Asia (see report), however, with the country’s economy showing no signs of decelerating from its positive annual growth rate, the interest in social drinking among Singaporeans has been on the rise, as the small city state becomes more and more prosperous.

As social drinking becomes an acceptable norm, alcohol abuse has been on the rise. A nationwide study conducted by the Institute of Mental Health Singapore (IMH), found that one in 32 Singaporeans aged 18 and above suffers from alcohol misuse.

Among some of the key factors playing a significant role in the growth of alcohol abuse are work related stress, peer pressure, family background, environmental factors, not to forget genetic variables which are moderately to highly heritable.

Those suffering from a substance dependence, do not lack the moral principles or the willpower to quit, instead they are suffering from a complex chronic relapsing disorder that impairs the control of their actions and their decisional power, even while being aware of the negative consequences their behavior carries.

Approaching substance misuse as a mental health disorder is key to understanding it and bring relief to those trapped in this vicious cycle, which affects not only the single individual but often their entire family as well. For the treatment of alcohol dependence, the general approach would be total abstinence which can cause uncomfortable withdrawal symptoms for heavy drinkers, however it is through an initial medical detox and a subsequent long-term comprehensive psychological substance misuse treatment program customized around the individual’s needs, that the best recovery results are achieved.

With its treatment center located in the town of Kajang, 20 km southeast of downtown Kuala Lumpur,Solace Asia has in recent years been seeing an increment in Singaporean nationals seeking Solace’s professional help to recover from their alcohol dependency,as well as other substance abuse problems. There has been a rise with clients belonging to different age groups opting to reside in the facility and benefit from the treatment over a period that spans between 1 to 3 months, each depending from the severity of the problematic use or dependency.

“When it comes to alcohol,moderation is key in order to avoid developing a dependency. That’s also because we never know who is predisposed to becoming dependent with time” says Solace Asia’s Clinical Director Dr. Prem Kumar Shanmugam.

Experts remind us that the occasional drink is not harmful, with recent studies even showing what are the health benefits of moderate alcohol consumption, however with an increase in alcohol intake our body tends to organically build a tolerance for the substance, requiring more of it until the use turns into an addiction.

Solace Asia offers a residential recovery program for a wide variety of substance dependencies,co-occurring disorders and to support recovery, with affordable rates starting at RM 15,500.

To know more about the recovery services being offered at Solace Asia, visit our website or write us at mail@solaceasia.org

MORE BLOG Articles:
The 5 Best Ways to Gamble Responsibly and Avoid Getting Addicted
Drug Rehabilitation | There needs to be a new approach to treating addicts
Facility Video
WANT TO GET YOURSELF OR SOMEONE INTO
TREATMENT?
We're here to support you.
Enquire today