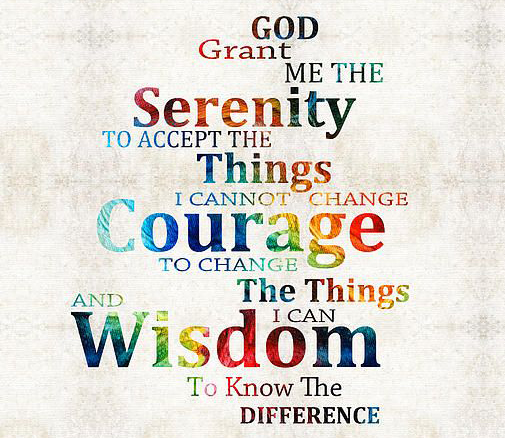 What is the serenity prayer?

What is the serenity prayer?

In 1934 at Heath,
Massachusetts, an American theologian, Reinhold Niebuhr composed a rather
infamous prayer on serenity and surrender, which is very apt for recovery. It
is known as the serenity prayer. There are many versions to the prayer, here is
a modified sample of the original form:

“God,
grant me the serenity to accept the things I cannot change, courage to change
the things I can, and wisdom to know the difference…Living one day at a time;
enjoying each moment at a time; accepting hardship as a pathway to peace;
taking, as He did, this sinful world as it is, not as I would have it; trusting
that You will make all things right if I surrender to Your Will; so that I may
be reasonably happy in this life and supremely happy with you forever in the
next. Amen.”

The widespread use
of the serenity prayer can be found in all 12-step programs. One would find
that meetings usually start with the prayer and end with it. The connection
between Niebuhr’s composition and the twelve steps happened accidentally and
all of a sudden.

In 1942, Bill
Wilson, the founder of the very first 12-step group, known as AA (Alcoholics
Anonymous) wrote of a New York member, Jack, who brought to everyone’s
attention a caption in a routine New York Herald Tribune obituary that read the
following lines:

“God, grant me the serenity to accept the
things I cannot change, courage to change the things I can, and the wisdom to
know the difference.”

Thus began the
ubiquitous use of this prayer among AAs as it enveloped the group’s essence in
just a few words. Prior to that, AAs had been using other prayers such as the
Lord’s prayer and the prayer of St. Francis. Yet, this unassuming prayer with
rather humbling origins, claimed its place as the primary go-to for addicts and
alcoholics alike because it was sweet and simple. Furthermore, it had traversed
religious and national boundaries as it is globally used today in 12-step
fellowships worldwide, proving for the first time that man can actually be
united in a common cause at a spiritual level.

How does it help addicts?

In so few words,
the serenity prayer does indeed sum the essence of recovery for many. Here is
why reciting the prayer helps addicts in recovery and why reiterating it has
been encouraged as a timeless tradition within the rooms. The following are
ways in which the prayer has proved useful to the malady of addiction:

Acceptance is not
apathy towards a particular cause. Acceptance is acknowledging one’s
limitations and it has a rather remedying effect towards people who think it is
their duty to bare the world on their shoulders. Addicts in active addiction
flee from responsibility because we can’t accept the conditions of the world in
which we live in. We have taken on more than we can hold for any given moment.
Acceptance allows us to surrender the things, which we cannot control nor
change over to a higher power or authority, who can then take charge of those
enigmatic issues.

Change is never
easy and often times scary to even contemplate. Yet, change is a necessary part
of recovering from active addiction. It takes immense and extraordinary courage
to face the truths of our realities as addicts and plunge into an unknown world
called recovery. More importantly, the fact we have no control over the people,
places, and things in our lives, makes the serenity prayer so affective for
those recovering from active addiction. This is because it takes significant
change to accept our own powerlessness to mature in life.

is part of the complete version of the
serenity prayer. Even though it is not recited by the 12-step groups as part of
a daily meeting, yet it is intimately connected to the last line of the often
recited version:
Regularly, those in early recovery feel that this wisdom
refers to what comes easy in life. Often times serenity appears only after one
has committed to acting on the more difficult choices in life. For example, the
choice to watch television and laze about or go to work and be useful to
society often times can be the difference between returning to active addiction
and having a fulfilling life in recovery. Doing the latter, which is difficult
and does not come naturally will eventually yield its rewards in spiritual
growth precisely because it challenges the addiction from its apathy. Hence,
hardships are good!