Spray paints, markers, glues, deodorants, nail polish removers, and cleaning fluids are not usually regarded as drugs because they were not made for that purpose. But, they contain volatile substances that have psychoactive (mind-altering) properties when inhaled. Inhalants are among the most dangerous of abused substances. Despite wide variations in their chemistry, all inhalants are dangerous. This sets them apart from the other classes of drugs. Also, they are the only class of drugs that are abused more by adolescents than by adults.

Inhalants are taken in through the nose or mouth in various ways (also known as ‘huffing’). Abusers may even sniff or snort fumes from a container (such as a glue bottle or a paint can) or spray aerosols (such as a computer cleaning duster) into their nose or mouth. They might even inhale fumes from a balloon. With some inhalants, the amount needed to produce a recreational effect is close to a fatal dose. The products are often flammable, sometimes producing serious physical injury.

Inhalants depress the central nervous system, in a manner much like alcohol. The effects both of them have on our bodies are similar:

Long-term use of many inhalants can produce nerve damage - in such cases, the user loses the ability to use arms, legs, hands, and feet. Inhalants might even lead to death. Sniffing or snorting high amounts of concentrated chemicals in solvents can cause heart failure within minutes. This is known as ‘sudden sniffing death’ and has the potential of occurring just after a single session of inhalant use. When high concentration is inhaled from a paper or plastic bag in a closed area, it can also cause death due to suffocation. 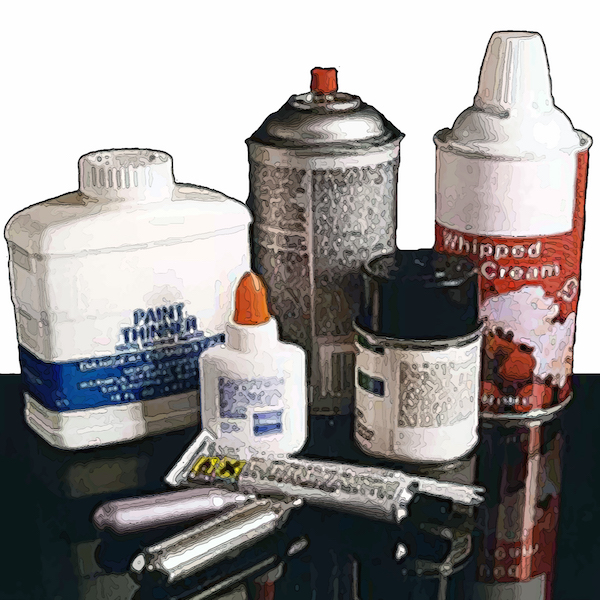 ●     Feelings of aggression or nervousness

Withdrawals from inhalants tend to include intense headaches, nausea, and difficulty in breathing. As each inhalant contains different chemical properties, the intensity of withdrawals and the symptom will vary from one to another.