Ketamine was manufactured in the 1960s and was basically used as an anesthetic for the casualties in the Vietnam War. Since then, it has been regularly used for war injuries. When used in prescribed doses by doctors, Ketamine is mainly used as a pain reliever, and to reduce convulsions. Researchers also say it improves asthma and shrinks breast cancer cells. It is commonly used in veterinary medicine as well.

The reason why the drug is so addictive is because it provides such feelings of hallucinations, euphoria, out of body experiences, and numbness, allowing a person to completely detach themselves from reality. This is why it is an extremely popular club drug for upon an overdose, users feel like they are becoming transparent and start to experience different dimensions and worlds. They feel like their bodies are turning into softer or harder substances. They might start to think that they’re remembering experiences from their past lives and become oblivious to their own identities. A lot of users take the drug to reach the ‘K-hole’ stage, which is described to be similar to near-death experiences. Such experiences allow people to perceive their consciousness as floating above their bodies. Ketamine is tasteless, colorless, and a water soluble drug, which is taken by injecting, inhaling, or ingesting via tablet or liquid forms.

Abusers often report of temporary paralysis on high dosage. This is why it is also referred to as a ‘date rape drug’ for it reduces physical sensations in people impairing their ability to move their limbs or even talk. The drug can even alter visual perception for at least 24 hours. The heartbeat of a person is also said to become extremely rapid and their body temperature shoots up. This often leads to coma and death. 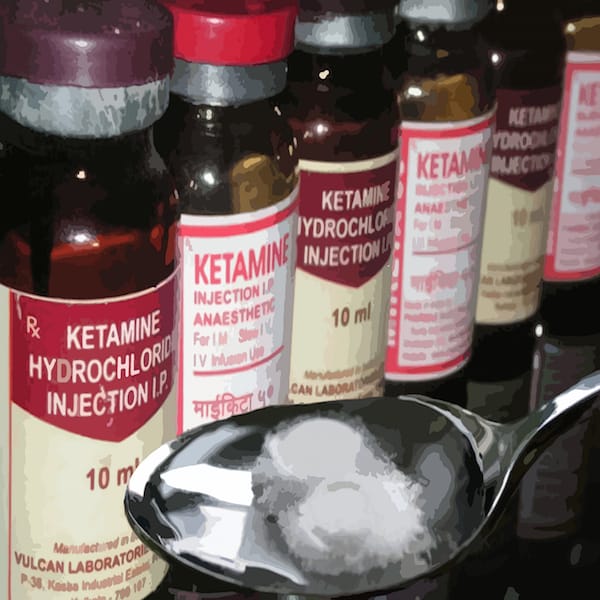 Ketamine, like most other hallucinogens, has not been determined to produce a physical dependency, but it will create a psychological addiction. It's psychologically addictive because it leaves its users with a deep yearning for repeated psychedelic experiences. Over prolonged use, addicts will feel:

Those withdrawing from Ketamine will experience blurred vision, delusion, as well as problems with their bladder and urination.