Pethidine, also known as Meperidine or Demerol, is an opioid painkiller. It has been used since the 1930s to ease moderate to severe pains, including migraine, headaches, surgery, gallbladder attack, sickle cell anaemia crisis, cancer, heart attacks, and childbirth. Oral dosage numbs a person’s mucous membranes which is why the drug is used as one of the elements in general and local anaesthesia. It comes in tablet and liquid form, and is generally consumed orally.

People with intense physical suffering become physically dependent on such drugs since they relieve pain. Those who take Pethidine in a hospital are unlikely to become addicted since the dosage of the drug will be controlled. However, those who consume prescribed doses are more likely to become dependent on it because they have the choice of controlling their dosage. Such individuals start developing a tolerance for the drug and would have to keep increasing their dosage to experience the same intensity of pain relief in the long run.

When Pethidine is consumed, our brain’s neurotransmitters begin to change. The drug starts to alter the working of our central nervous system. A euphoric effect is felt. The narcotic properties of Pethidine produces feelings of pleasure. The body slowly starts to become sedated, and a calm and relaxed feeling washes over the individual. An abuser starts to feel their pain diminish within the first two minutes itself. More often than not, a person starts abusing Pethidine to numb an emotional or physical pain, or to come to terms with unbearable stressors. But as the high starts to subside, individuals may feel anxious, irritable, and restless. An addict may often visit a hospital with a fake injury in order to get hold of the drug.

If used in an uncontrollable setting, Pethidine has the capacity to cause delirium, seizures, and hallucinations. The drug may even lead to convulsions in people who are already vulnerable to such affliction.

Pethidine should never be mixed with other drugs, especially those drugs that depress the central nervous system. Combining Pethidine with such depressants (such as benzos or alcohol) can lead to cumulative overdose and death. 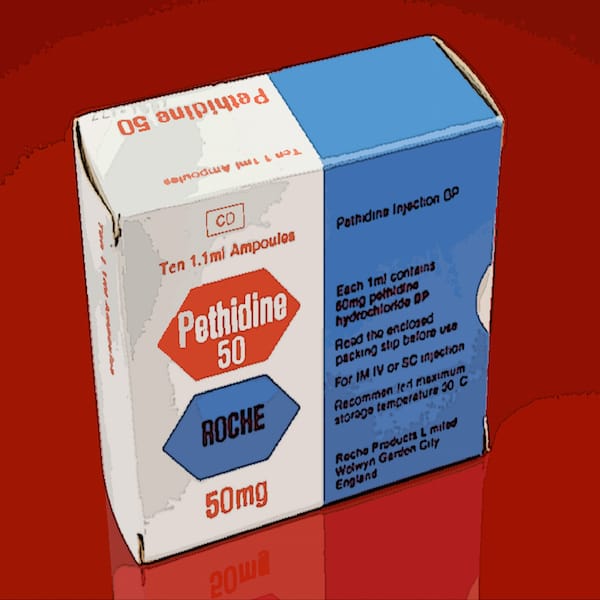 Some opioid users may exaggerate or extend their drug use in hope of receiving medication to dilute expected symptoms. Hence, history needs to be supplemented with physical examination and with constant monitoring and review.