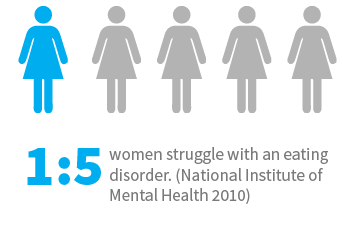 What Causes Someone to Have an Eating Disorder (ED)?

An eating disorder is not a character defect. It is a disease whereby food is used as a means to avoid overwhelming feelings. Be it pain, joy, sadness, anger, guilt, and shame; eating disorders reduce the ability to feel. By doing so, people with eating disorders have a hard time connecting with themselves and others.Emotional sobriety is the state of accepting one's feelings. It is necessary for anyone suffering from eating disorders to have this type of sobriety. For more information on this subject, click here.

What is an Eating Disorder (ED)?

Eating disorders are a three-pronged pathology. It has a physical, mental, and spiritual component. Physically, the compulsion to overeat or control one's diet can be seen from a sufferer's lifestyle. On the mental side, is the obsession for food or ways to control eating that is harmful to the body. Finally, the integrity and morality of the person is put to question because of all the crazy things done in the name of this illness.The sufferer finds him/herself spiritually bankrupt. He/she may have broken relationships to keep the illness alive. Or, that there has been so much control or overeating, that the sufferer's health is on the line. For example, he/she could get diabetes, heart disease, or organ failure due to the habits of this disease.  In other words, the zeal for life has lifted, leaving the sufferer in an empty shell of existence. Where once there was vitality, now, only suffering. So, with all these at stake, what's the solution? Recognising one's difficulty is the first step. Then, taking action via treatment and recovery is the next. Like a diabetic needs constant insulin medication, so too, does an eating disordered (ED), need a program of recovery.

There are many ways, eating disorders would pervert the act of eating. While it is a most cherished and natural activity; the dysfunction lies in the overeating or controlling of foods. Below are four types of eating disorders. Three of these illnesses are diagnosable by the DSM-V. For more information on DSM, click here. The disorders are as follows:

Anorexia Nervosa occurs when you restrict eating, for fear of putting on weight. Anorexics are people who avoid meals because they want to remain thin or slim. It's common among young girls and homosexual men. It's closely tied to body-image issues as well as Pocrescophobia (Fear of getting fat). For more information on AN, click here. It is an approved illness diagnosable by the DSM-V.

This is the copious consumption of foods followed by purging. The overeating aspect is like those suffering from BED (Binge Eating Disorder). But, unlike BED, it's followed by purging. This could be in the form of intentional vomiting or over-exercising. There is much shame attached to this process, and hence is secretive in its conduct. For more information on this, please read on "What is Bulimia Nervosa?" It is an approved illness diagnosable by the DSM-V.

ON is characterised by nutritional obsession at the expense of enjoying one's meal. Its sufferers are afraid of eating the wrong thing for fear of illnesses related to nutritional problems. ON is listed under EDNOS (Eating Disorders Not Otherwise Specified). In the DSM-V, those suffering from ON will get an EDNOS diagnoses because it does not fall into the category of BED, AN, or BN. For more on ON, take a look at this link.

BED is the copious consumption of foods without any desire to control its intake. This is the standard overeating pathology. It's when people compulsively eat without ceasing. It can be due to certain trigger foods such as sugars and refined carbohydrates. But, it's less to do with food addiction, and more to do with the process of overeating. If untreated, it could result in diabetes, heart disease, and all types of cancers. It is an approved illness diagnosable by the DSM-V. For more information on BED, click here.

Why do people develop an eating disorder?

As mentioned before, having an eating disorder is not a choice people make. Hence, it's not one's fault that they have this disease. It's no more their fault than it is a fault of someone who has asthma or diabetes. Thus, it's important not to blame yourself should you suffer from this ailment. But, it's necessary to be responsible for your recovery hereafter. Below are some reasons for developing an eating disorder:

People with BED will be suffering from low amounts of serotonin, but high amounts of cortisol. This causes them to have high stress, but low pleasure. To make up for this deficit, they use food to balance it out. By eating a lot, they evoke the pleasure driving neurochemical, dopamine.

People with eating disorders usually will have the illness in the family. Parents that use food to calm their feelings, would have passed this very same gene to their young ones. There are specific chromosomes linked to the prevalence of Bulimia and Anorexia. Also, twins are more likely to have an eating disorder than fraternal siblings. PsychologyPeople with eating disorders suffer from mental illnesses. For example, depression, obsessive-compulsive,  and anxiety disorders. These co-morbid illnesses will create problematic thinking and beliefs. They range from perfectionism, low self-esteem, impulsivity, and a disability to express feelings.

This consists of the sufferer’s past and present circumstances.  For example, they may have a history of struggling with sexual or physical abuse. Or, there could be underlying childhood trauma, and disturbing family relationships. For more on childhood trauma as a cause for addiction, click here. It's important to process these things when treating eating disorders.

The culture of the slim and beautiful is a definite catalyst for EDs like Anorexia and Bulimia. Also, eating healthily could have started well for some, but for others developed into Orthorexia. And, the prevalence of unhealthy foods in the market, makes it difficult for BED sufferers to live in food sobriety. Especially when whites and sweets are associated with love and celebration, the world over. Hence, culture plays a great deal in not just evoking the illness, but maintaining it.

How to treat Eating Disorder?

To treat an eating disorder, one needs to understand that it is an illness. There is no way for untreated EDs to recover on their own. Whether controlling or overeating, food has been an unmanageable part of the ED's life. Hence, it's important to recognise this powerlessness over food. Thus, hand the decision around food towards a nutritional clinician who can help you make sound choices. Unlike substance addictions, ED falls under the arena of process addictions. In substances, total abstinence is recommended. But, people cannot live without food. And hence, a balanced dietary approach with meal planning, and nutritional advice is a necessary program for recovery.

At Solace, you or a loved one could begin this process of claiming your life back from the ravages of an eating disorder. For more information on our treatment programs, do give us a call at +60333100145. We're always here to help you with any of your eating disorder concerns.