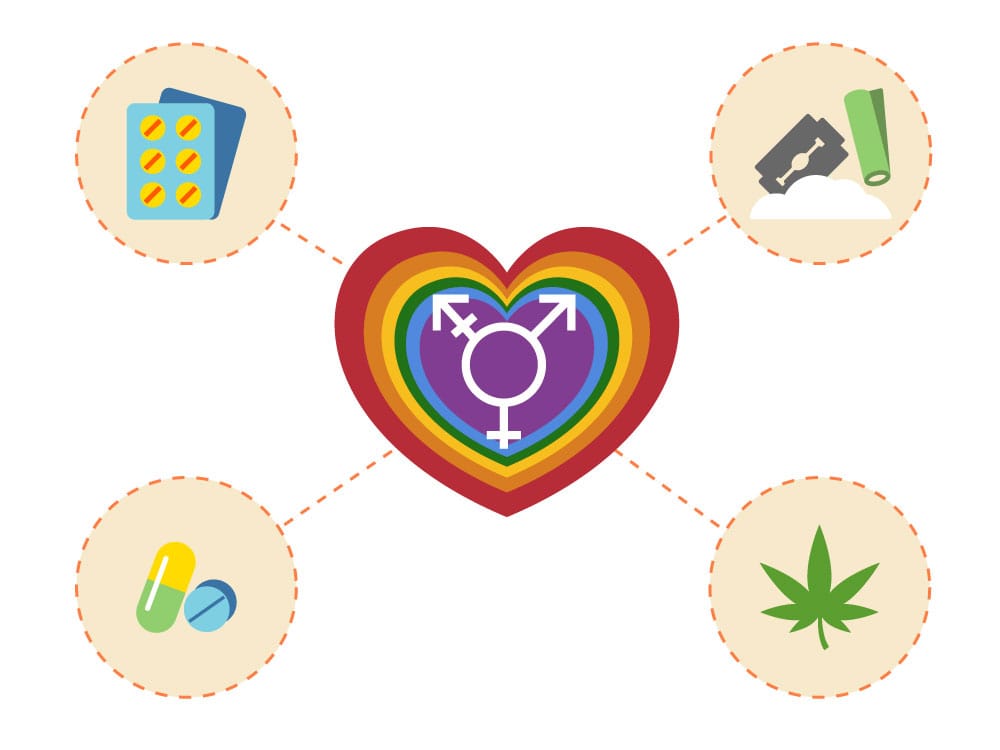 The Cause of addiction in the LGBTQ Community: Discrimination and Trauma

LGBTQ is an acronym for Lesbians, Gays, Bisexuals, Transgenders, and Queers/Questionings. The LGBTQ community derive their identity from their sexual preference. Lesbians are women who find their own gender sexually attractive. While, gays are men who find their own gender sexually appealing. Bisexuals are men and women who find both genders attractive. Whereas, transgenders believe that their opposing gender is the right one; i.e., they were born into the wrong gender. And, Queers or Questioning are those who do not find any of these categories enough to explain their sexualities.

As a group, they have received much rebuke and discrimination from the wider world. It's because their lifestyle is seen to be incongruent with the norms and expectations of heterosexuality. This has created, over time, a phenomena called "Heterosexism". Analogous to racism and sexism, it is a form of prejudice based on the fact that heterosexuality is the right path. Like institutionalised racism and sexism, many LGBTQs suffer from legalised "heterosexism". For example, if LGBTQs happen to live in countries that do not accept them, they will be left with much trauma. For more on trauma as cause for addiction, click here.

Hence, it is no wonder that the ratio for substance abuse between non-LGBTQs and LGBTQs has been reported as 3:10. It means that for every 3 heterosexuals, 10 homosexuals are prone to drug/alcohol addictions. Taking a look at the discrimination and trauma faced by LGBTQs daily, will help us to understand why this is so.

Discrimination and trauma within the LGBTQ community

As the stigma and discrimination perpetuates, it's highly unlikely that the addiction will stop. For homosexuals who abuse substances like alcohol or drugs, the core of the problem is not the addiction. It is the discrimination felt by living in societies that do not accept them wholeheartedly. The traumatic experience of being an unaccepted individual has consequences. Read more on "how childhood trauma affects addiction" to see this connection. So, to treat our LGBTQ clients, we need to move away from endorsing these discriminations and misunderstandings of LGBTQs. To do that, the most basic thing is to acknowledge the cruel effects of heterosexism and sexual prejudice on LGBTQs. These cruelties manifest as follows:

LGBTQs will have experienced exclusion from social groups and activities.

Just because they are who they are, others will shun them due to psychological, sexological, and ideological reasons. It's natural to want to belong. As social animals, humans are meant to belong to a group. But, due to one's sexual preferences, the LGBTQ will have experienced shame. Shame kills self esteem. Due to such neglect at the level of being, LGBTQs will seek their addictions as a means to numb the pain of being unacceptable.

In treatment, we need to remind our LGBTQ client, that he/she is acceptable and worthy as he/she is. Such unconditional acceptance will eventually relieve the pain that has been the cause of addiction.

LGBTQs will have experienced physical abuse by family members or partners

Some family members or partners may not tolerate an LGBTQ relative. It's not uncommon to see the consequences of such dislike. A gay son could have experienced beatings by a father who didn't accept him. Or even, gay partners, who dislike who they've become may act out their dismay at homosexuality, by abusing their partner. Hence, due to this, they may feel the need to seek addiction to numb out the physical pain of abuse.

Many LGBTQs do not want to come out for fear of having to experience this. Like anyone, they love their families and communities. They have a similar attachment, but there is dissonance between who they are and what others expect of them. Most religious traditions do not accept LGBTQs as normal. Hence, religious codependency could result in much self-sacrifice, which results in having to look for a way to hide their truth. Many seek addictions to do this. Read more about religious codependency by clicking here.

LGBTQs will have experienced job loss, loss of child custody, or other forms of public discrimination

The state can be the most stigmatic agency towards LGBTQs. Many countries do not endorse same-sex marriages. Also, some nations would have laws that would criminalise any form of LGBTQ expression. Hence, many homosexuals will face the discriminating hand of the law. For example, loss of jobs, inability to adopt children, or losing custody in favour of a heterosexual parent. Addiction has the capacity to numb the pain of having been neglected by the state.

LGBTQs will have been victims of homophobic violence

Homophobia has its function in allaying heterosexual fears of becoming gay. These fears are founded, but when taken to extremes, could harm existing LGBTQs. For example, when homosexuals become the target of street violence such as beatings.

LGBTQs will have experienced peer ridicule and rejection, in their youth

Such violence may even happen in school when an LGBTQ is picked on by gangs of homophobic heterosexuals. Not only are they excluded from society, they become an object of ridicule and abuse. To seek a way from such harms, addiction provides a comforting resource for numbing the pain.

LGBTQs will have experienced these discriminations combined with others.

These others may be a combination of being a racial minority, religious minority, etc. Hence, life as an LGBTQ is painful, and addiction has provided them with the answer.

Seek Recovery By Recognising These Pains

First of all, LGBTQs need to understand that they have an addiction problem. Whether they are addicted to alcohol, drugs, or behaviours; they need to recognise that addiction is not the answer. To recognise the pains of the past, the addiction has to go. To do that, the client will need to abstain from his/her addiction by undergoing treatment with a gay-friendly centre. For more information on why a gay-friendly centre is necessary, take a look at this link. In recovery, and through a program that addresses the addiction, the LGBTQ client will get in contact with the pains of trauma. By understanding and releasing this pain, they will find the healing they truly need. In such healing, life will be so much more worth the living. Read this to see what addicts can look forward to in a life free from addiction. For more information on treatment for addiction and healing from trauma, call us. We'll be most happy to help you with your addiction concerns.